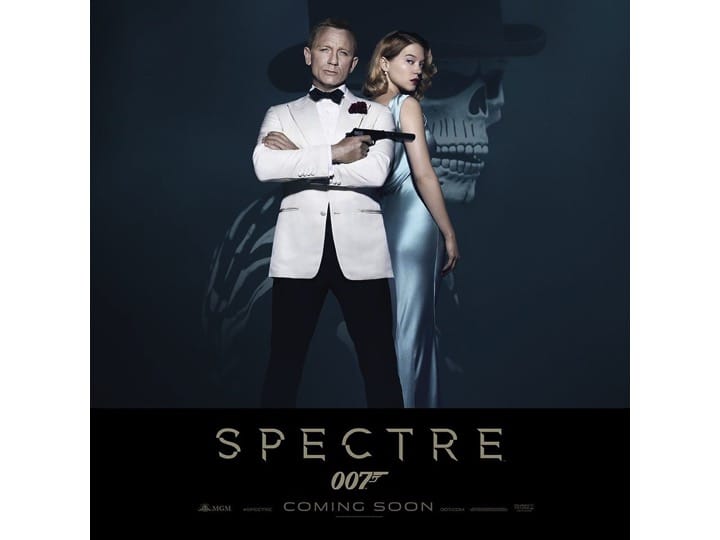 Are you guys ready for the next Bond-Movie? The official premiere of ‘Spectre’ is in London tonight and I’m sure a lot of you are going to see it very soon. I had the honor to watch it even before. No worries, I won’t tell you the whole story. But I think, some things I may reveal.

So for those of you who are real action fans, I promise you guys – you won’t be disappointed. Also in the 24. Bond movie, Agent 007 shows off his qualities in shooting, chasing and car racing. Well, as usual most of the cars are getting destroyed. In fact, I read that cars worth 37 million dollars were demolished. It’s said that the whole movie costs were something about 300 million dollars – crazy don’t you think? But it’s definitively worth to see it!

It’s already the fourth time Daniel Craig plays the cult figure Bond – I mean – James Bond. He still knows how it’s done. This time, he is not only the hard MI6 Agent. He also shows his sensitive side. Accompanied by his Bond-Ladies who are embodied by Monica Belucci and Léa Seydoux he really shows that he has feelings as well. Personally, I really liked it how the two women show their strength. They don’t wanna be guarded of James Bond but they want to fight for themselves. And this should be said – without his Girls, Bond wouldn’t succeed.

Well as this is a fashion blog, I obviously wanna talk about the outfits of the movie as well. Apparently, James Bond looks best in his suit while chasing all the bad boys like a guy called Franz Oberhauser who’s played by Christoph Waltz. His timeless outfit of a white shirt, a black suit and a tie underlines his attitude of reliability and that he goes for classiness.

Let’s continue with the Bond-Ladies. Monica Belucci plays Lucia Sciarra and is absolutely stunning in her first all black look. To make her outfit on point she wears a hat of which a thin net covers her face. It tells you that she has to hide and it makes her character quite mysterious. There’s another Bond-Girl called Madeleine Swann played by Léa Seydoux. In my opinion, she’s the best Bond-Girl ever. Well, I’ve not seen all 24 Bond movies but of those which I’ve seen she’s definitively the best. Madeleine is strong and she has a quite inspirational attitude. Moreover, she really knows how to dress. In the whole movie she shows up with several outfits which are all marvelous. In one scene she wears a simple white dress with a brown Chloé bag – nothing fancy but the simplicity makes it perfect. In another appearance she wears a beautiful satin gown in a light mint green. I could go on and on about her great outfits but you should really see it yourself. 🙂

Alright, I won’t tell you more guys! ‘Spectre’ is so exciting and spectacular. I’m really curious about your opinions – let me know as soon as you’ve seen it.

Have a lovely rest of your day guys. Take care and be prepared for the movie of the year – Mister Bond is back!