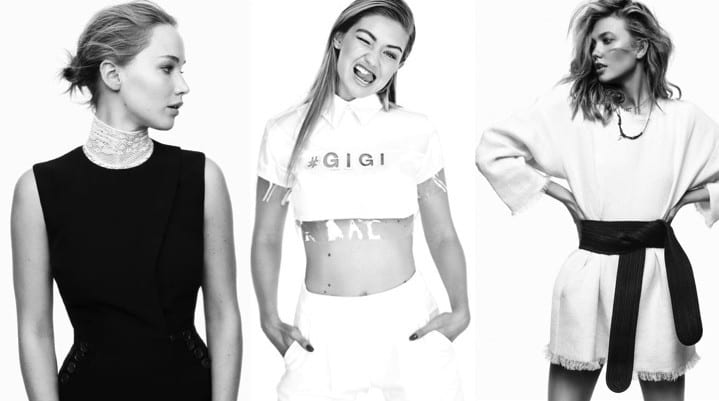 Don’t you think it’s funny how each day of the week has gotten a specific function in social media? The most popular one is probably Throwback Thursday. Actually, I think it’s really funny to see some throwback shots once per week. But there is also flashback Friday which is pretty much the same. Anyway, today it’s Wednesday also known as Woman Crush Wednesday. So why not get some inspiration from three amazing women who all worked really hard for their success and have all found their own amazing style.

She’s the face of Guess, Maybelline Ambassador and a true fashion icon. Hadid has been on almost every fashion magazine cover and rocked the runways on the past fashion weeks. Her career started when she was only two years old with Baby Guess. She then got away from modeling until she finished school.

Even though it seems that today the blonde beauty is booked by every label, it wasn’t easy for Gigi in her teenage years. A lot of model agencies didn’t want her because of her size. But she didn’t give up and finally had her big breakthrough with another campaign for Guess. I think Gigi is a great inspiration. Her style is very sophisticated, cool and always perfect. She has never changed herself and believed in her qualities. Last year, her biggest dream came true when she made it on the runway of the Victoria’s Secret Fashion Show. The 20-year-old girl has really proved that it is worth it to stay true to oneself. She has it all. She’s a great actress, she’s super natural, pretty and funny. The 25-year old American girl has already won three Golden Globes and one Oscar. This year she could even win another gold man as she has been nominated as best leading actress for her role in the new movie Joy. Despite her great success Jennifer Lawrence seems like she’s just a normal girl. She stumbles at the Oscars but just laughs about it and she never shows any diva affectations. Above all, she has a great style by which we can all be inspired. Who ever said models are dumb was definitively wrong. This girl proved that she can be one of the most popular models (including a Victoria’s Secret Angel), a student at the New York University and a true fashion icon. Last year she has launched a scholarship called Kode Karlie for girls who are interested in computer science and software engineering like she is herself. With her 23 years, Karlie is a true inspiration for all of us. She was never afraid of showing her personality. Her amazing style is powerful, sophisticated and extremely chic. What a great WCW. 😉

Alright my sweet readers, those three women crushes have all proved that everything can be possible. Whatever you want to achieve, you can do it if you are ready to work hard for it. Have a great Wednesday everyone and let me know who’s your WCW of today!