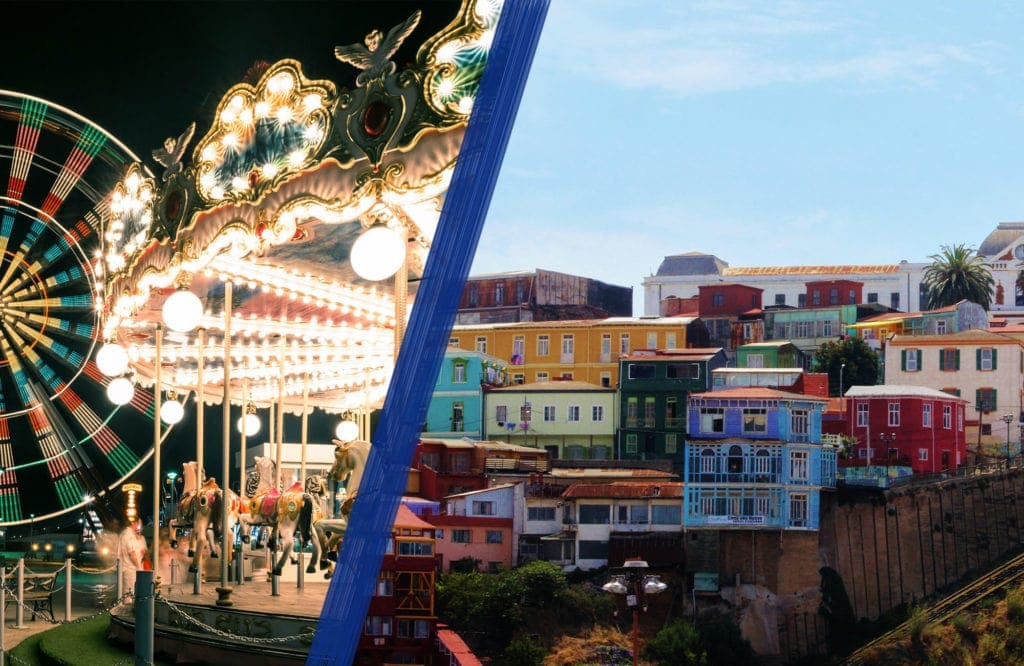 Summer is finally here and we’re ready for vacation! But you don’t need to go back to the usual, well-known destinations to get a refreshing bath in the water or a tasty ice cream at the beach. Nothing is more exciting than getting to know new countries, which might turn out as a little paradise. Let's move on to part two of our Unexpected Getaway-Guide!

Long hikes through the untouched nature or an expedition through the desert are in first place of all the activities you can do in Chile. So, if you’re thinking about taking a trip to the South American country, you should be light on your feet.

Surrounded by red scarps, the Puritama River extends in the Atacama Desert in Chile. It runs through a lowered valley where the plants spring in full green colors and the water is sparkling under the incandesced sun. After a three-hour walk to the end of the valley, a bath in one of the hot springs does work miracles and all the struggles seem to be forgotten. The village San Pedro is great for staying overnight to be well rested for the next tour. The hippie spot with its small shops and restaurants is the perfect basis for all sorts of trips. 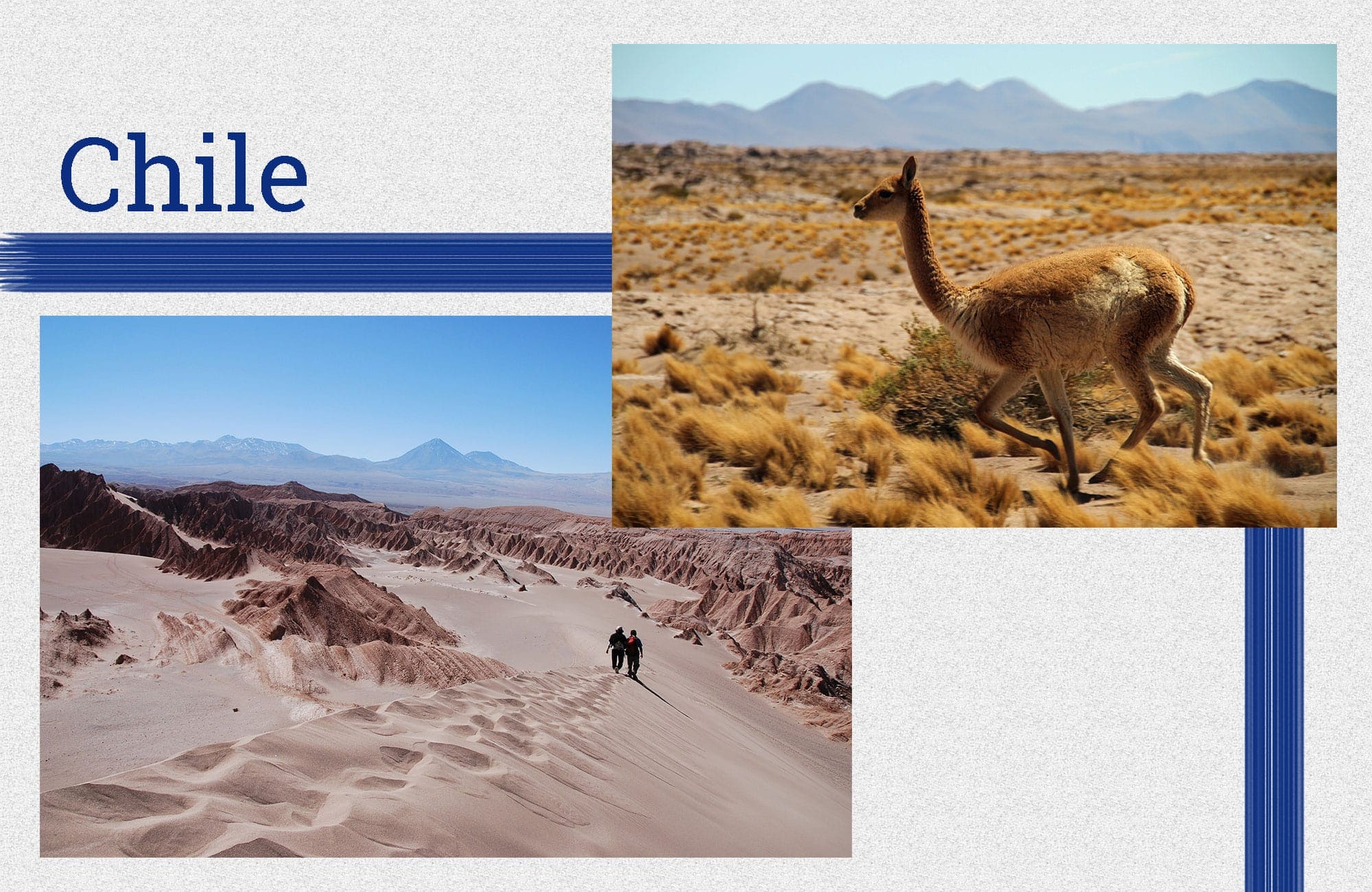 The region Patagonia is another highlight in Chile. The temperatures are very low in this area, so stunning lakes and glaciers characterize the landscape. The national park Torres del Paine, where you can come upon the fascinating fauna of Chile, is also located in Patagonia. Whereas the fluffy vicuña is resident in the savanna, you could come across a puma, or at least some condors, in the mountains.

Besides the capital Santiago, the harbor town Valparaíso is considered as the countries center of culture. The historic city is built of colorful houses, which extend over multiple hills and streets with artistic facades. The city of poets and thinkers with its many museums and the European-like architecture is stated a UNESCO World Cultural Heritage.

Pieces of clothing seem like they were made from jute bags, a body is covered in real looking feathers and some jeans are clearly crafted out of several small pieces – the Lupe Gajardo Fall/Winter 2015 collection seemed to be originated in another part of the world. In 2015, the Chilean designer presented one of her collections during the New York Fashion Week for the first time.

The young designer studied costume design in Vina del Mar, near Valparaíso, and stood out for her big talent. Natural fabrics and graphic patterns characterize her designs, which were shown during the Berlin Fashion Week as well. Guadalupe Gajardo Böhme was born in the desert in the north of the country and is now living in the capital Santiago. So it’s not that surprising that her inspiration mainly comes from her home country Chile: fringes, traditional colors and light, flowing fabrics can be found in nearly every of her drafts.

Georgia is a country of contrasts. Besides lonely mountain villages and old cloisters, the big cities are developing into a venue for night owls and luxury lovers. Indeed, Georgia has with some beautiful historic cities. However, the capital Tbilisi has developed into a modern metropolis in the last few years. The city is transforming into Georgia’s creative main spot where everything seems to be possible. There are construction sites at every turn, which will be skyscrapers or luxurious hotels soon. Most of the party scene insists of electric music clubs and raves. Also, with Tbilisi Fashion Week and many newly opened boutiques, fashion is also becoming a huge part of the urban life.

If that’s still not adventurous enough, you should definitely visit the city Batumi, next to the Black Sea. Batumi is often called the “little Las Vegas” because of the new buildings, which shine in every color of the rainbow at nighttime. The modern architecture with the impressive palaces and casinos along the palm tree boulevard turn the city into a very special vacation experience.

But even in the lively Georgia, you don’t have to resign quiet relaxation. The famous Georgian vine is produced in the picturesque vineyards and the local cuisine belongs to the best ones in the whole world. Cheese and many spices are pivotal elements of the Georgian dishes, which are sometimes more on the Oriental side and sometimes more on the Caucasian side. After an extensive meal, you should be well prepared and ready for a trip to one of the impressive churches or cloisters in the mountains of Georgia.

One of the creative heads Tbilisi has brought up is the designer Gola Damian. He was born in the capital in 1991 and is still living there until today. He launched his own fashion brand in 2011 and was presenting his collections at Tbilisi Fashion Week already. His clothes are combining sportive elements of Georgia’s club scene and formal wear. But Damian not only likes to mix different stylistic elements and shapes. Also, his fashion isn’t gender specific and his models are often casted away from the streets.

He is clashing previous norms and is often compared to his Georgian colleague Demna Gvasalia (creative director of Balenciaga and founder / creative director of Vetements), because of his rebellious attitude. The fashion shows of the young Gola Damian are fun to watch: latex pants and leopard prints alternate with comparatively prude cardigans and polo shirts. Damian himself said about his fashion designs that he wants to unite Georgia’s past with its present and that’s exactly what makes him unique.

Missed the first part of the Unexpectet Getaway-Guide? Click here to discover more places and their fashion talents.

All other images via Pixabay