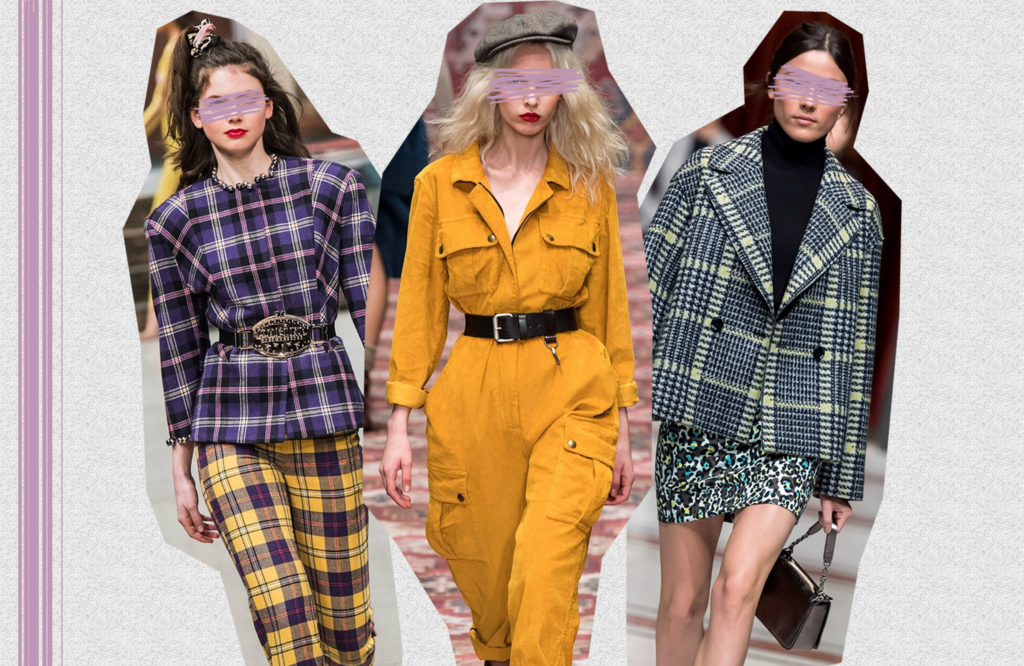 Fashion Week? Haven’t we just been there? Well, the fashion calendar runs fast, very fast. And to make sure you don’t miss anything: last week was Berlin Fashion Week. Simultaneously with Men's Fashion Month running, our favorite German designers presented their collections for fall/winter 2019/20 and they were in no way inferior than their international colleagues. Here are the four trends of Berlin Fashion Week FW19.

From kilts to school uniforms and the punk scene. These are just a few likely associations when thinking checks. The classic pattern was created from Scottish clan temples and differs itself from various variations. At Fashion Week Berlin, it was definitely one of the biggest trends showed by multiple designers. They showcased the print in all kinds of colors and shapes. At Maria Hoermanseder and Lena Hoschek, the models walked down the catwalk in colorful versions. In contrast, Neonyt or William Fan, focused on muted colors. Even designers like Marc Cain, Maisonnoée or KXXK proved, that the checked pattern is definitely more than just a school uniform.

Jumpsuits and overalls have been around for ages. Actually, for more than a hundred years! For example, they were first worn in sports in 1917. Today, it’s impossible to think about another outfit for racing, winter sports or aviation. In fashion, as we know, a jumpsuit can stand for power but also for sexiness. The designers in Berlin chose both ways. First of all, the Austrian designer Lena Hoschek relied on a powerful look, Marcel Ostertag was all about glamor and glitter, while Kilian Kerner concentrated on a black classic version for his label KXXK. Riani and Dawid Tomaszewski also proved that a jumpsuit can still be interpreted in contemporary ways. Luckily, it found its way from sport to fashion.

It’s no secret that art and fashion walk hand in hand. No matter how simple the prints may be, their effects can still be very powerful. From different colors, sizes or patterns – they spice up every outfit and give it a touch of modernity. The German-Polish designer Dawid Tomaszewski certainly likes to be inspired by art or architecture. So as a matter of fact, these elements could not be missing in this year’s fall/winter 2019 collection. Labels like Marc Cain, Riani or Neonyt followed the same path and printed the artistic shapes on jackets, trousers, skirts or coats. Whether you like it as an all-over look or as one eye-catcher in your outfit, those artsy picks are so versatile that you can easily mix and match them according to your personal style.

Let's turn back time for a second: 1962, British Vogue. A rediscovered mini skirt wrote history, thanks to the also British designer Mary Quant. Actually, it was already invented in the 30s but after it was shown in Vogue again, nobody really cared about the old days, and it was the hottest must-have of the whole decade.  Since such a short length (ending high above the knee) wasn’t really allowed before, Mary Quant was one of the most revolutionary designers. In the 70s, the mini skirt continued to have its golden age.

Soon, the length was adapted as mini dresses and it made its way to the shop windows worldwide. Now, back to today's mini skirt situation: You could already catch one or two short hemlines in the collections of spring/summer 2019. For fall/winter 2019/20, there will be even more short dresses and skirts as seen at Berlin Fashion Week. Marc Cain wrapped the skirt in vinyl, Marina Hoermanseder was obviously inspired by some 80s vibes, Marcel Ostertag incorporated graphic forms and Riani showed a mini dress in a check pattern. With so many great variations, there’s just one thing left to say: Cheers to Mary Quant!