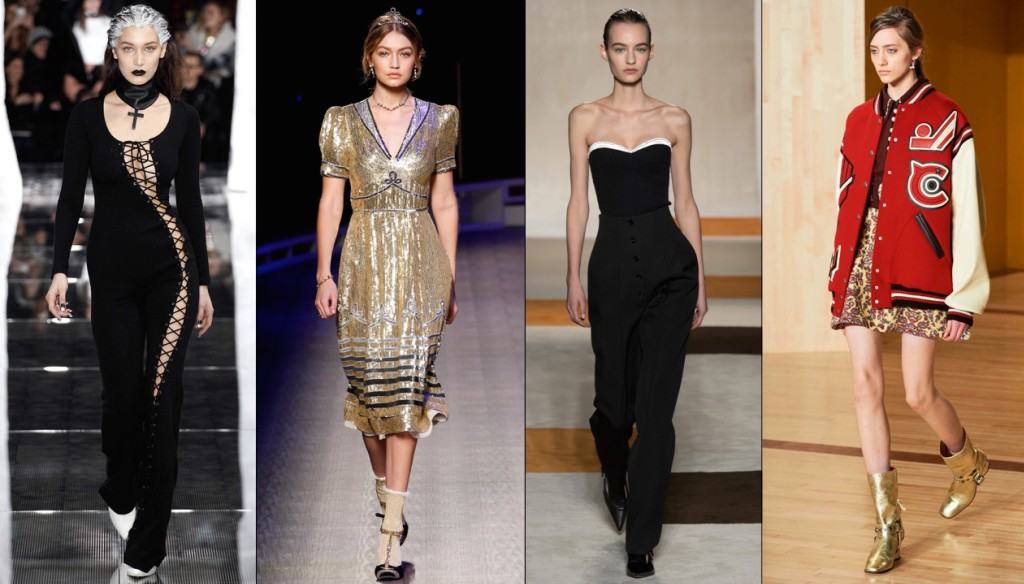 What’s up my sweeties,

I hope you are all doing well! So last week, the first fashion month of 2016 started officially. The first location was great New York City where the A-list designers got the chance to show their Fall/ Winter collections for 2016. More than 150 shows have been held during those last five days. In this post I’m sharing with you some of my favorite moments and some great looks which were shown in the city that never sleeps.

So first I’d say, it wasn’t an ordinary NYFW as usual. Apart from the amazing runway shows from all the famous designers there were some other special events happening. One of them was the presentation of the Yeezy Season 3 collection. A massive crowd – including the Kardashian/ West/ Jenner clan – was attending the incredible show at the Madison Square Garden. And of course chief designer Kanye West did something different than just a normal catwalk show for his collaboration with Adidas. The models – with their leader Naomi Campbell – were standing on huge platforms on which they rested for ninety minutes while the musician-turned-designer was playing his new album. To end the epic show Kanye West said thank you to everyone who supports him including Anna Wintour, Olivier Rousteing or Carine Roitfeld. Oh and as it would be the most normal thing on earth he also mentioned that he’s designing a video game which should come out very soon – yes this man wants it all. 😉 Apparently, Kanye West was not the only musician who showed his designing skills at the New York Fashion Week. The one and only Rihanna presented her first whole collection for Puma called FENTY X PUMA. The models on the runway – including the Hadid sisters – showed amazing clothes all black and white. Oh and there were some yellow sneakers as well. 🙂 The whole collection was a mix of gothic style, sportswear and hip hop. There were a lot of cut-out details matched with faux fur jackets and transparency. I’d say the R’n’B Queen definitively proved her sense for fashion! So let’s turn to a bit an older stager but who actually also knows the music business pretty well. She started designing for her own label 15 years ago.  And in this rather short time, Victoria Beckham has reached so many goals and she showed she can not only be a spice girl but a true fashion icon. The fall/winter collection for 2016 should really represent the evolution of her own style. That’s why a lot of pieces appeared on the runway which she has loved over the years. One of them was the corset which she wanted to make more wearable, fresh and modern by lighter and softer fabrics. There were slip dresses which reached the trendy midi length and apart from the plain colored clothes Victoria also showed some checked and striped patterns in different colors. Overall, the whole collection was a tribute to her timeless and edgy style which represents the strong and confident woman of today. Moving from a – let’s say – ordinary catwalk to a more unconventional one. After Tommy Hilfiger turned his last show into a Caribbean beach party he took his guests on another journey on this last show – retaining those holiday feelings of course. It was all about navy vibes! Mister Hilfiger turned the whole stage into a huge boat. The invited guests all had the honor to be a part of Tommy’s cruise trip. And as it was to expect, the collection was as amazing as the setting. Gigi Hadid, Taylor Hill and Co. showed beautiful nautic-inspired looks. There were a lot of glitter dresses and light fabrics matched with navy coats. One thing I loved about the looks were the socks! As some of you may know, I’m obsessed with fancy socks and I loved how Tommy presented them in his fall/winter collection for 2016. So the last collection of New York Fashion Week I want to show you is the one from Coach. The mood was all about urban life. The clothes were all colored in relaxing earth tones and there were a lot of different patterns. On the wooden runway, the models all presented metallic boots or sneakers which matched perfectly with the rest of the outfits. During the show, it seemed that the style of the clothes got more mature. It started with patched up college bomber jackets in striking colors and went on with softer dresses. The last part of the show was mostly about biker jackets and dark colors. Even though there were like different moods, the models managed to represent confident and tough women with a soft touch of femininity throughout the whole coach show. I hope you all enjoyed my little recap of NYFW. Let me know what was your favorite collection. :)Unfortunately I can’t show you all my favorite looks and collections because there were so many! But each of them was special and none of them was the same. I mean, only in this five collections I showed you there are so many details to discover. This diversity is also what I value so much about Fashion Weeks. Every designer has his own visions and his ways for how he realizes his collections. And somehow it concerns us all because in the end, fashion is what represents the society of today.